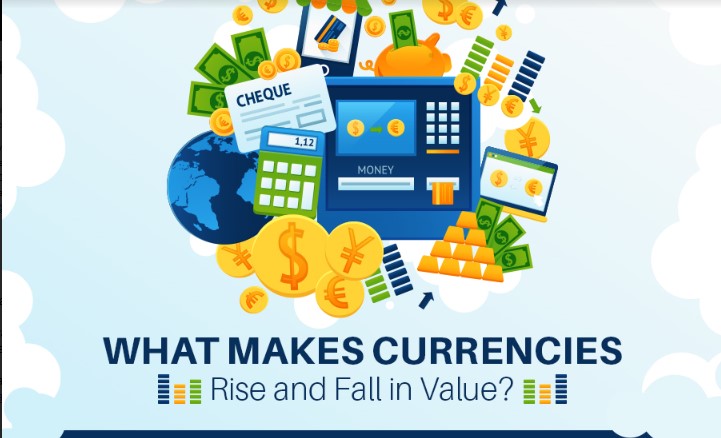 What Makes Currencies Rise and Fall in Value.

For all the Knowledge we acquire in school, not a single time has the educational curriculum cover financial education. For all you know, we receive a lot of knowledge in school but even business courses limit the content they feed the student on financial education. It always comes in a form designed to pass to students what they should know. Few people get lucky to get their hands on miscellaneous, in addition to what they are supposed to know but regardless, that is just to say we don’t really get enough education on particularly financial education.

Today I’m going to run you through factors that make currencies (fiat or paper money) rise and fall in value. I am sure people have come across news and charts comparing different states’ currencies like the US dollar to other state currencies and how economies get affected when their currencies lose their purchasing power.

The value and exchange rate of a currency can fluctuate dramatically for better or worse, and provide a window into the country’s economic stability. Below are the factors and events though are likely to prompt a change in a currency value.

Inflation refers to the rate at which the general prices of goods and services grow or drop. The purchasing power of a particular state currency is determined by its inflation and therefore small inflation rate indicates a healthy, stable economy, whereas a large increase could cause economic instability that significantly devalues the currency.

If inflation rates are very high, the central bank of a state could try to counteract by increasing the interest rate, which encourages savings and overspending. This is also likely to stimulate foreign investment and bring more capital into the economy, thus increasing demand for that particular state currency and boosting the currency strength to stabilize the particular state’s economy.

A balance sheet of a country refers to its income and expenditure from foreign transactions like imports and exports. How balanced a country’s payments are, affects the exchange rate of a country. Let’s say a country spends more of its state currency on paying for imported goods and receives less income on goods they export. This will create more supply of that particular state currency while there is not enough demand because less goods are exported this will cause that particular state currency to depreciate. On the contrary, if exports exceed imports, the current account surplus will lead to an increase in the currency’s value.

Every state’s currency rise in value base on demand and the reason why the US dollar is so powerful is that it is used all across the globe for transactions through fiat currencies. It loses its value with time but compared to the ones that have a lot of demand, it always beats its competitors because of dominance.

And for that, a country with a large amount of government public debt owed by the state government is likely to acquire less foreign capital, and demand for that state currency will depreciate. It will eventually lead to inflation causing the currency to lose its purchasing power.

If government debt is forecast to be huge, foreign investors will sell their bonds in the open market which will result in a decrease in the exchange rate for that particular state.

Actually every country has its terms of trade with other countries, which refers to the ratio of export prices. If the former grow at a quicker rate than the latter, a country’s terms of trade will improve, thus drawing in more revenue.

This increase in revenue will raise the demand for the country’s currency and increase its value, which drives the exchange rate against other pairs. And the contrary will happen if import prices rise at a quicker rate than the export prices.

The terms of trade are closely linked to the country’s balance of payments, in that both inextricably linked with a country’s export and imports which as a way whether it causes demand or more supply to that particular state currency resulting in whether a rise in value or depreciation.

A lot of factors affect state currencies positively or negatively, accounting for factors such as GDP (Gross Domestic Product), unemployment rate, housing statistics, and trade balance can strongly affect a country’s economy as in its buoyancy.

A country’s political and economic climate can have a bearing on the value of its state currency. Generally, if a government is stable, and the economy is sound, that country’s currency will have high demand, leading to higher exchange rates. If positive factors are strong with regards to the country’s income growing and the country’s expenditure is not exceeding its income, if these are strong the currency will be likely to appreciate.

0n the contrary, if an economy is experiencing political upheaval or an economic downturn, its currency becomes less attractive to investors, and demand will duly fall. For example, Brexit uncertainties made the value of the British pound fell sharply on occasions during 2018 because of the deal.

Just like a lot of analysts and economists speculate on the daily market about how currencies are going to rise and fall. Truly, some of these sentiments can drive the values of state currencies. If the sentiment of a particular state currency is projected to rise, the investors will increase their demand for it so that they can make a profit in the coming months.

This increase in demand will result in an increase in the value of the currency, which in turn will prompt its exchange rate to rise.

In some cases, a country’s government might act to manually address the inflation or deflation rate of its currency.

If a currency’s value is quite distant from a country’s economic aims, becoming excessively weak or strong from free-market trading, the government may step in to artificially redress the supply and demand to be balanced.

An increased money supply reduces the interest on borrowing the currency, which makes people and businesses more likely to borrow it because of the lower interest rates on the borrowed currency. When these increased borrowings get spent, the economy will most likely grow. However, if the money supply grows at a quicker rate than the supply of goods and services, prices could inflate causing the currency to lose its purchasing power.

What you Need To Know About Coinsbit Exchange.

5 Things To Do During This Bear Market

Warning: Know this before You lose Money In Crypto