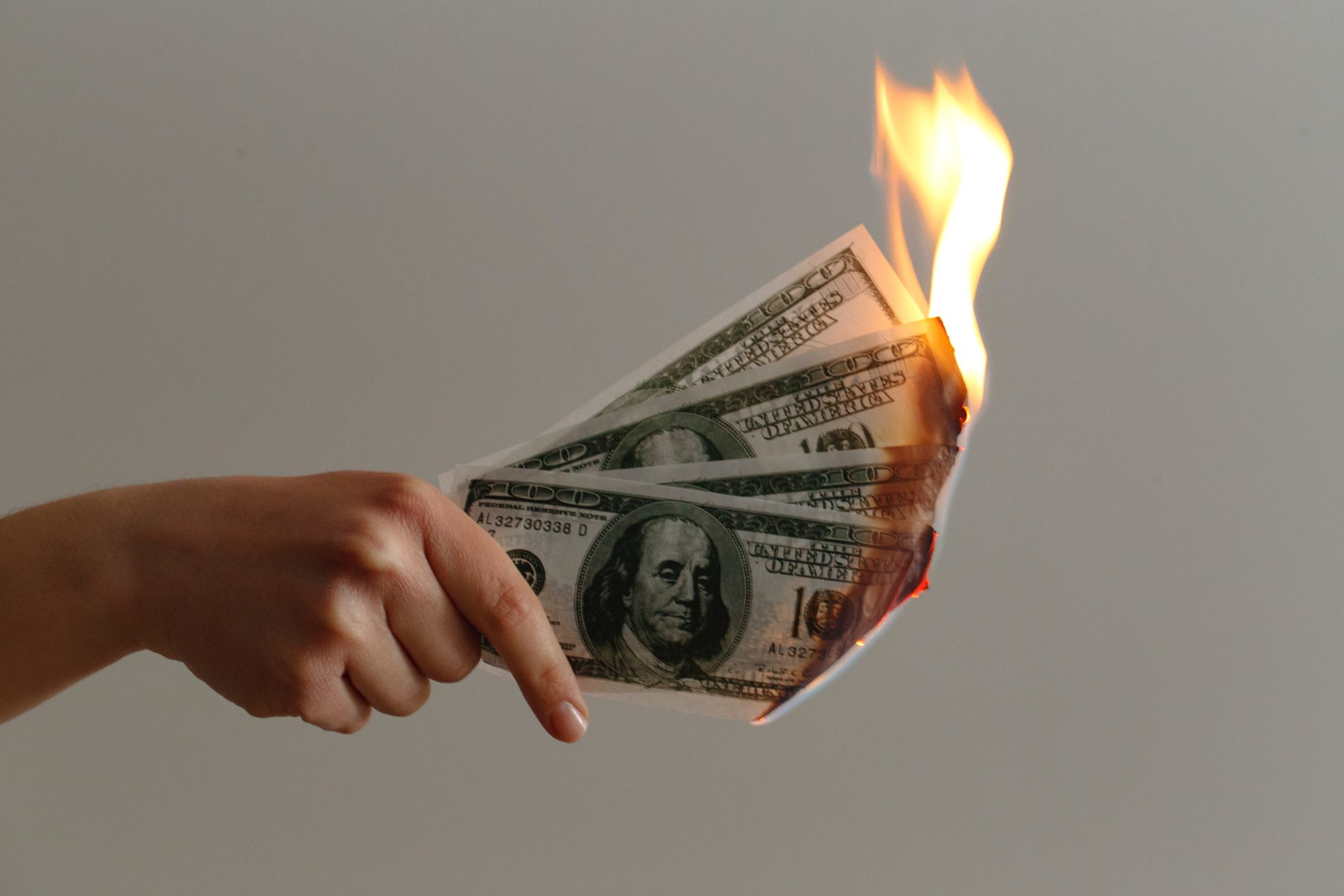 People in our current generation as technology continues to evolve trust government less every day, so is the US dollar as well as institution and companies every day. People in their everyday lives prefer more technologically advanced cash than carrying a lot of cash on them. People prefer carrying credit cards around and prefer online banking. In a millennial generation, we believe fiat currency addicts you to spend once you have cash in hand, and more advanced cash like Bitcoin helps you save the value. People are smartening enough to understand that, fiat value is decided by the government and of course by few people whereas, for the store of value like Bitcoin, its value decided is by the people. In this 21st century, it is easy for people to perceive that accountability is the government’s worst nightmare as the Dollar gives government privacy and takes the people to own away, while digital currency gives the people privacy and takes the government privacy away.

The US dollar, as a matter of fact, lost its value way back 82yrs ago when it was taken off the gold standard and finally in 1971 when it became a currency. Currency as a word comes from a word like current in electricity, it needs to keep moving to maintain its relevance. If it stops moving it rapidly, it loses value, and if the loss in value affects people extremely. Throughout history, governments have printed currencies, and historically all currencies with time lose their value and go back to zero. Since they knew the currency will lose its value and go back to zero one day, in 1933 the 32nd US president created social security and Medicare to stabilize the US dollar value that will lose its value rapidly over time and to sustain it for a bit longer but that was not the case. Social security and medicare are massive financial disasters for the people of America unless you are not enlightened enough to understand the new rules of money. The US dollar continued to lose its purchasing power since then and as at the time George Bush took power in 2001 Bloomberg reported that the US dollar has lost 13.2%  and now it is worse as up to 92% of its purchasing power is lost.

As time passes by and new heads of state set in the dollar continue to lose its value on its way to zero as the US government makes every other country that is implausible to the US financial system or the dollar their enemy, posing sanctions and threats to anyone who disfavors their way of going about things. These and other factors like the trade way and digital currencies are bringing the dollar to an end. And the new Trump administration seems to be outfoxing every country that disfavors them with threats and sanctions for all they know. The US major linchpin is their currency which is the US dollar which they consider the largest currency reserve worldwide and as the US continues to sanction and threaten other countries and any other thing that disfavors them, it looks like this time the other countries as a way of bringing the US dollar down hits different in extreme. Both the Europeans and Asians are playing astute games here attacking the US on low key economically and you will see president Trump tweeting bitterly about it. 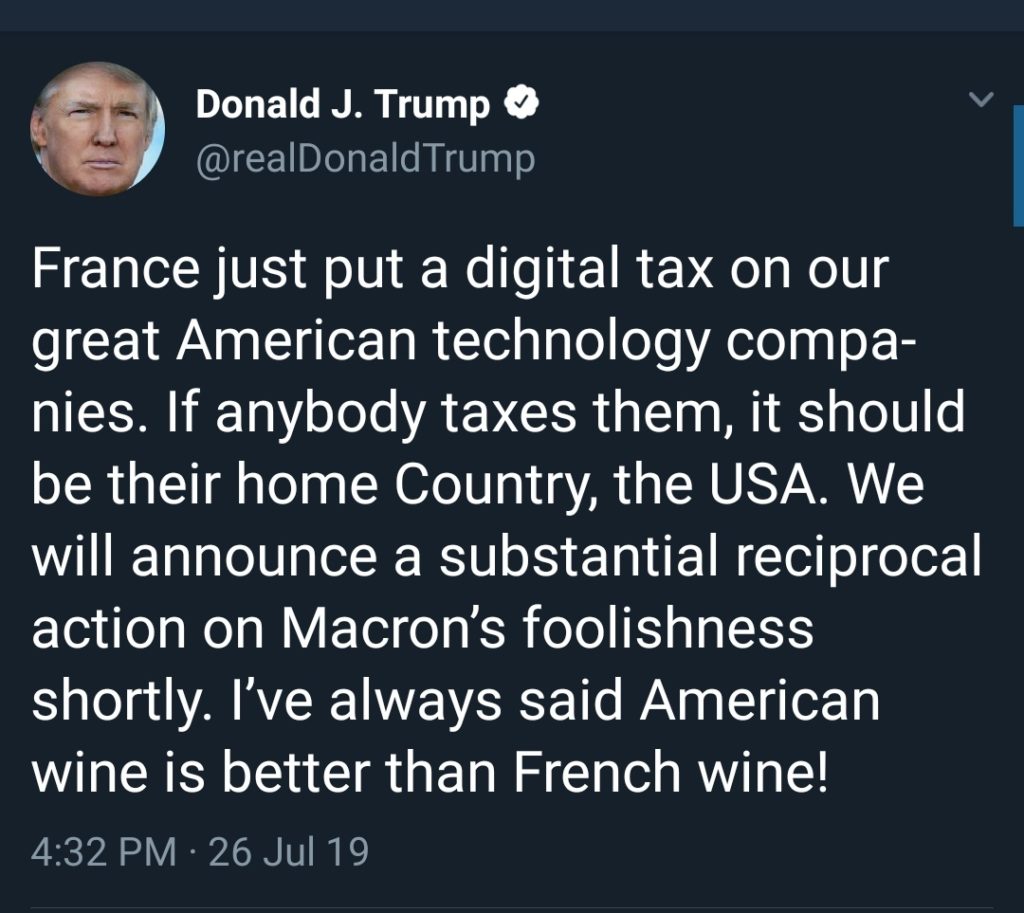 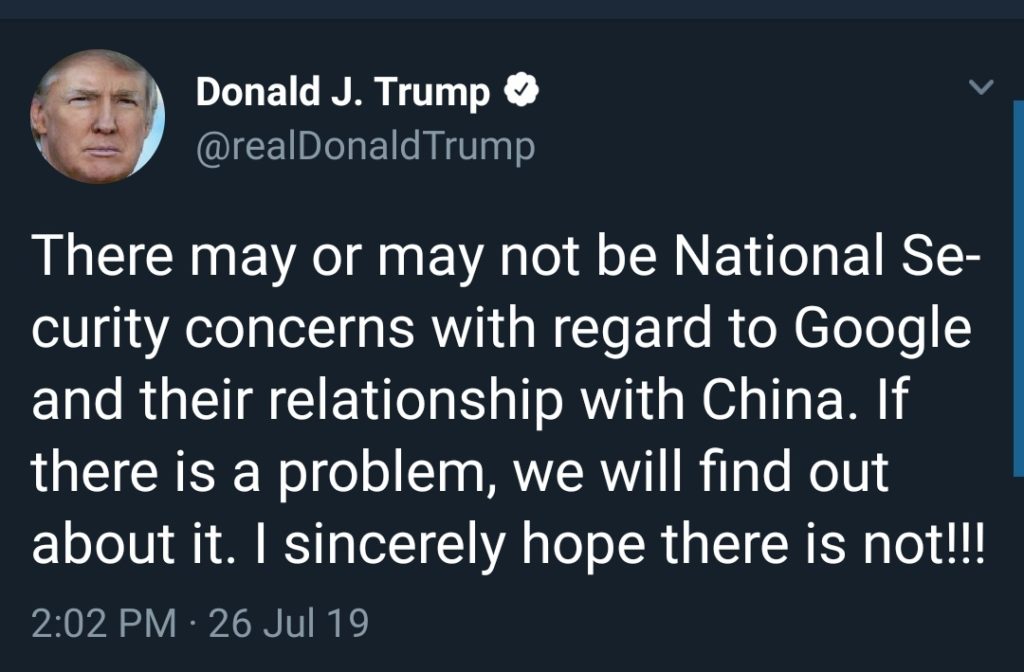 As in 2018, the US was in debt for about $21 trillion while the global recession set in to hit economies and individuals. In cases of Venezuela crisis snd others, the only possible solution is turning to digital currencies like Bitcoin. Recently, President Donald Trump tweeted on digital currencies and Bitcoin and as a way to go, he only did that because he thought it was a threat to the US dollar and indeed it is.

For Trump to say he is not a fan of Bitcoin and Cryptocurrency because it is not money to him was a big hit for himself because every millennial person knows that the government always manipulates us and so do Trump. Always manipulating stuff with his tweets, this time he clearly busted himself out in a way of saying, Bitcoin and other cryptocurrencies are a threat to the US dollar so far as he knows and it got his attention. He tried tagging crypto assets with unlawful behavior, drug trade, and other illegal activity which absolutely sounds like just a campaign to favor the US dollar and it is not going to work. His tweet will rather draw people’s attention to Bitcoin and other cryptocurrencies. 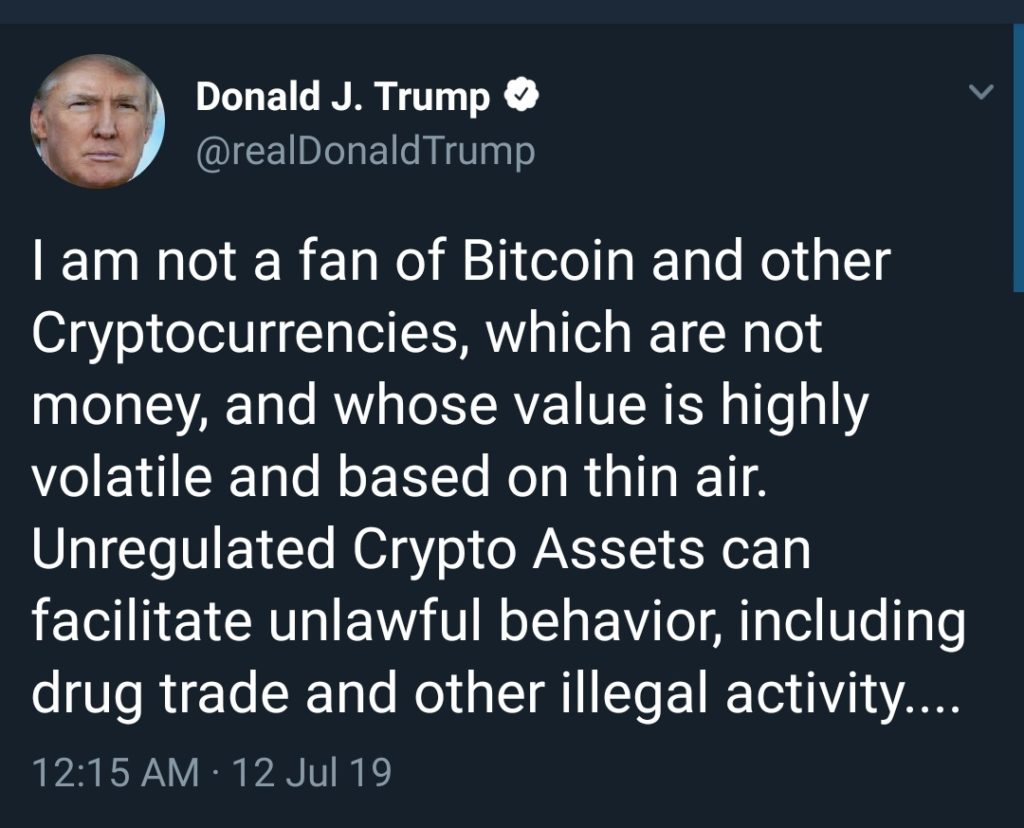 He continued to talk about Facebook Libra coin which in my opinion will lack absolute decentralization, but a way to go, I believe this could replace central banks in years to come as a believe central banks behave more analog and move to a more digitally advanced world by the days. 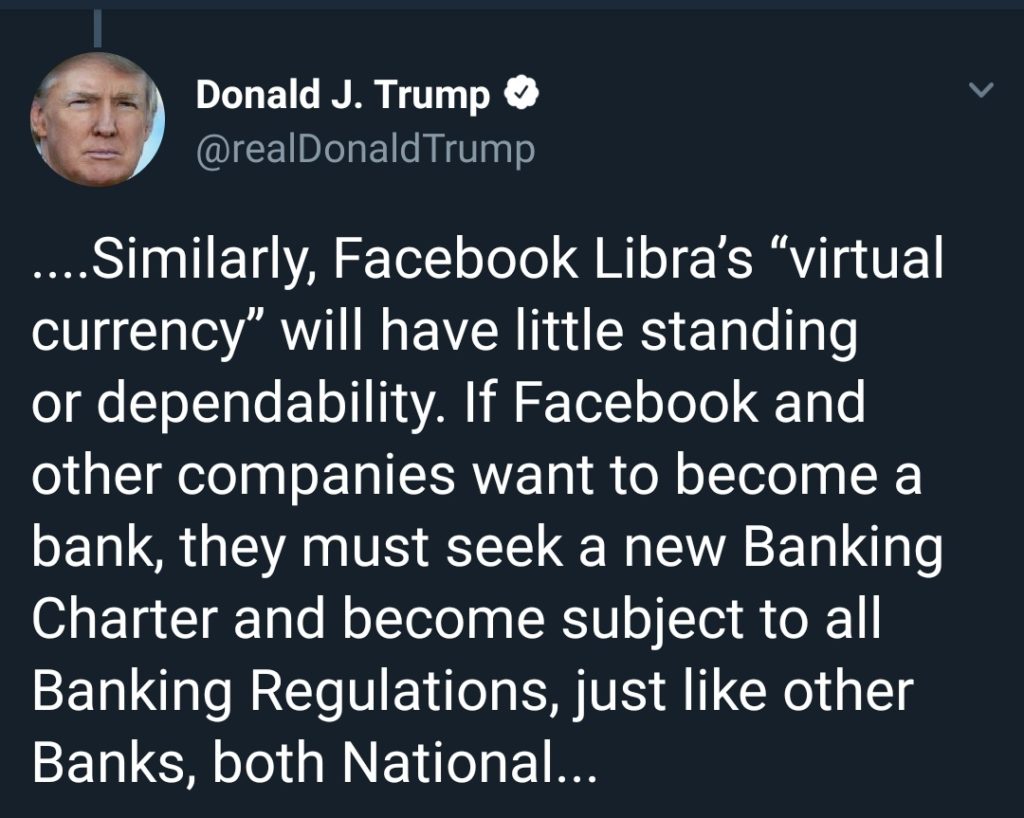 At a point of trying to battle for the US dollar, you should know by now it is as good as dead because if it is what he says it is, then it must be speaking for itself. People don’t advertise Bitcoin and cryptocurrencies but its negative publicity sells them on the media every day. 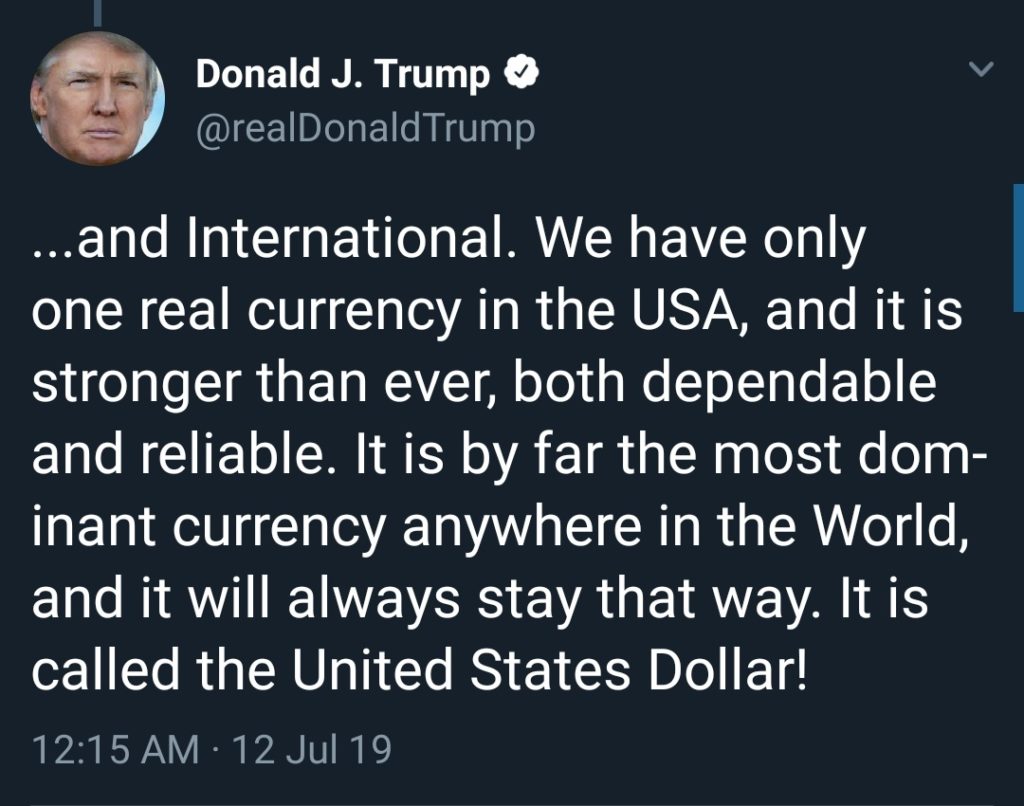 Over the past years, the US has sanctioned whoever disfavors their way of going about their financial system and trade rules, initiated trade dispute, affronted both their enemies and allied countries just for the sake of the dollar, imposing unilateral rules and forcing nations to abide by their demands or face economic imprimatur. They refuse and withdraw from multinational treaties and agreements, which start trade wars and create enemies for themselves all over the world. A country like Russia is not in good terms at all with the US and Vladimir Puttin is finding every possible means to run his country without a single US dollar influence or interference and looking into a  different hypothetic reserve currency which could replace the US dollar which people believe could be bitcoin.

Under this year’s G20 summit that happened in Tokyo, Japan; Britain, France, and Germany in the meeting proclaimed a new special trade mechanism called the Instrument in Support of Trade Exchanges (INSTEX) that operates independently avoiding the US sanction, allowing trading outside the SWIFT system which is dollar dominated. This new system will allow the Europeans to do business with countries like Iran and any other countries that are currently being imposed by the US sanction. That move against the US from the Europeans cannot be underestimated and with the China trade war, the damage it will cause for the US dollar will be worse than we could think of.

There have been plans over the past couple of years, over how to set up a trade mechanism that will be free from the influence of the dollar operating independently but the progress and its dominance did not gain momentum until the US withdrew from the JCPOA (Joint Comprehensive Plan Of Action) with Iran. Now that the Europeans and Asians coming together with new trade mechanisms that do not operate with the dollar alongside digital currency dominance such as Bitcoin and Libra, I believe it is time to say goodbye to the US dollar.

As countries like Iran can sell their oil, chromium and other natural resources to Europeans and Asians and import from them as well through this new initiative INSTEX apparently in my understanding, there is going to be a shift in the world’s most powerful reserve currency from the US and desertion of the US dollar as the most powerful reserve currency will be up next after rest of the world turn against it. Europeans and Asians are smartly up against the US and as of now, there is less to say about the US winning because in my opinion, they are out of possibility.