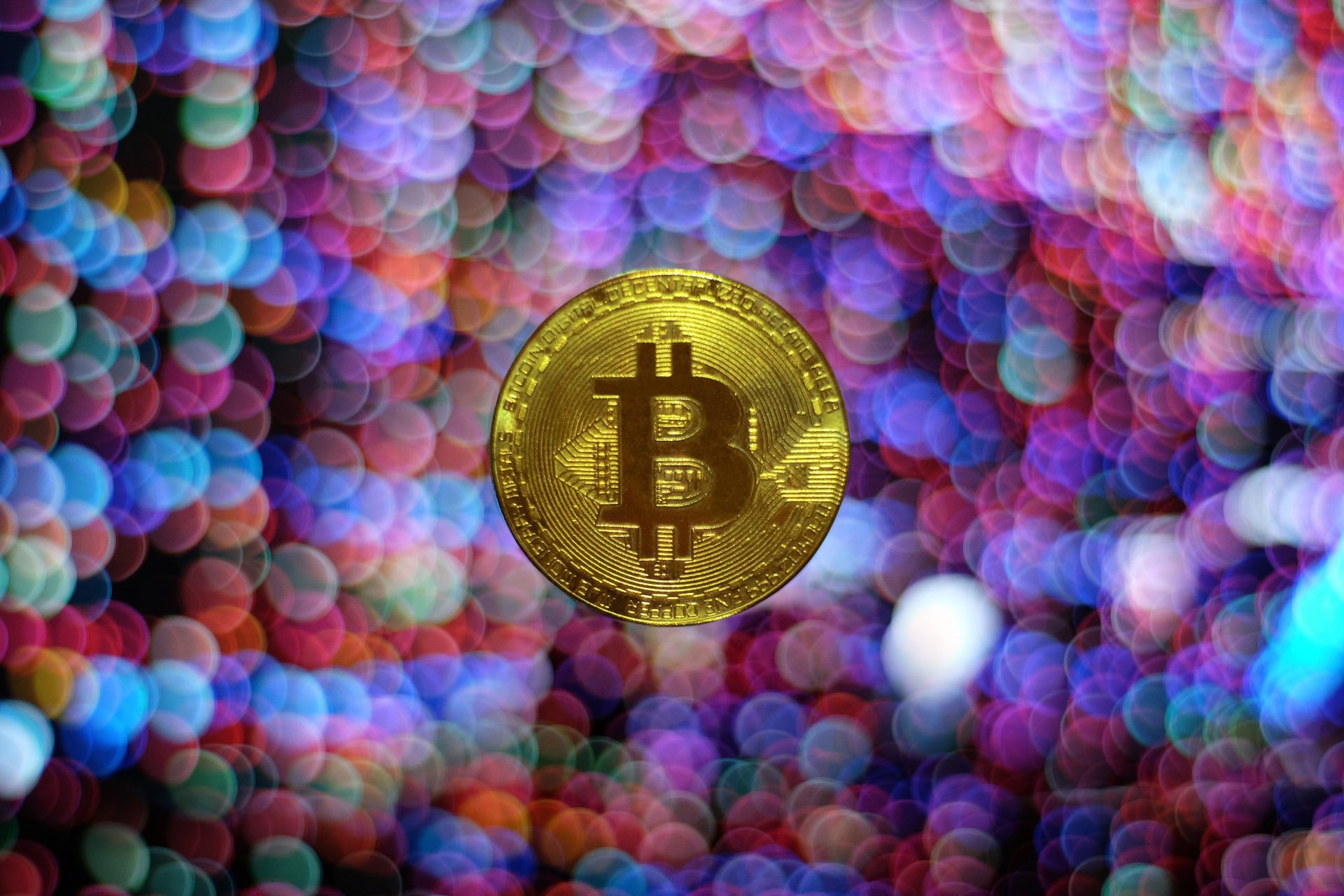 For anyone who is well versed with this technological era would not agree less with me that Bitcoin is a digital Gold. The first time I read Bitcoin whitepaper and the reason they created Bitcoin and how Blockchain is incredibly changing the world around us, there is no doubt about it. It got an incredibly massive future such that those who went all out to jab its existence ironically ended up embracing it. And you see bad news spread faster than good news, Bitcoin over the past years and cryptocurrency got very bad publicity including government coming down on it. But with it all let me tell you, nothing ever stops its dominance and growth. And a lot of prominent people who issued all kinds of negative statements ended up being positive after they got exposed to it. Now let me nail down five main reasons why I think Bitcoin is digital gold and it is viable to replace gold;

Bitcoin Was Created To Aid In  Time of Recession

Ever wondered why Bitcoin was created?? And what was the actual real use case of it? Well, Bitcoin whitepaper was first released in 2008 describing Bitcoin as innovative peer to peer network that is controlled by no one, and anyone can take part in its operation. This was created to aid in the 2008-2009 global recession to liberate people’s financial conditions and give them a whole new better way controlled by the people themselves and not government agencies etc. It created a new set of rules and brought freedom to the financial system and as a matter of fact, it places the financial market on a whole different level where people can do whatever they want when they want with their finances, no limitation of transactions, transactions with fewer charges working on a distributed system, I mean that’s exactly what Bitcoin is doing since its existence 2008.

During the times of recession, people tend to look for something with more intrinsic value to invest in, or maybe to diversify to avoid losing a lot. For the time been a lot of people seem to be turning to Bitcoin the fact that it gives freedom and more accessibility in times of recession and diverting from GOLD because gold is becoming more traditional, and in this century people and advancement go hand in hand.  This year bitcoin and gold charts are on the same parabolic movement and it looks like bitcoin is getting somewhere.

Gold versus Bitcoin chart in all time and YTD comparison

For an asset class to have a value in the long term, it needs a real use case. It must have demand and supply flowing through and must build up to some of the extents of having intrinsic value. As you know already, investors want some kind of asset that their capital is always secured and they can get their money back whenever they need it, as well as an investment that does not cost their capital. For whatever asset class that is limited in quantity, once a set of people acquire it, the supply of that particular asset will depend on those who have it in their possession. And its value will be controlled by them and how they want it to be distributed. For fiat currency, the amount that can be supplied is unlimited and for gold, the amount that can be supplied is unknown. Unlike all the rest, Bitcoin stands tall of it all, only 21,000,000 worth of Bitcoins can be supplied, yes, and indeed it is limited in quantity unlike gold, silver, and fiat currency(Paper Money).

As to its limitation, it makes it have more intrinsic value in the long term than gold. For now, Bitcoin distribution is ongoing(Bitcoin mining) and out of the 21,000,000, an amount of 17,800,850 Bitcoins are already in people’s possession and circulating. It is left with just a few amount of 3,199,150 left yet to be mined as we are talking which makes it extremely limited compared to any other commodities like gold. To me, its limitation in quantity alone makes it have more intrinsic value than gold.

As you all agree we are in the 21st century, a millennial generation, technological era, people choose things that will give them convenience over other things that will stress them, like what am I trying to say?? Though gold is traded on the modern financial market, as compared to Bitcoin, smart investors are more concerned about the advanced future more than anything. Traditional business is becoming a thing of the past now, so is people choosing gold over any other commodity but with the features and the technological advancement that comes with Bitcoin clearly indicates how people will tend to choose Bitcoin side as a new emerging modern type of Asset class over gold and any other traditional commodity when all the above factors are considered.

Bitcoin Dominance Continues To Grow Over 62%

Now using the historic chart below, Bitcoin as a new asset class from the beginning, has always been on top with the years, starting from 2013 on the chart up to date. For your information, after 2013 a lot of cryptocurrencies started to emerge, there’s been a competition as to which is the best cryptocurrency, and as at now you are reading this none of them are able to surpass Bitcoin, Bitcoin as an asset class has yielded over 8,270 profit since it came about. As compared to other cryptos, it keeps getting better and better. The number of active wallets this year for Bitcoin is growing to its all-time peak, and to this extent, unlike in 2017, it is crushing altcoin. This tells you how exceptional Bitcoin is from other cryptos as it continues to dominate over all the other cryptocurrencies, everyone in 2019 prefers Bitcoin than any other cryptocurrency because of its performance.

Bitcoin Dominance chart at all-times below.

Bitcoin Dominance chart in 2019 below 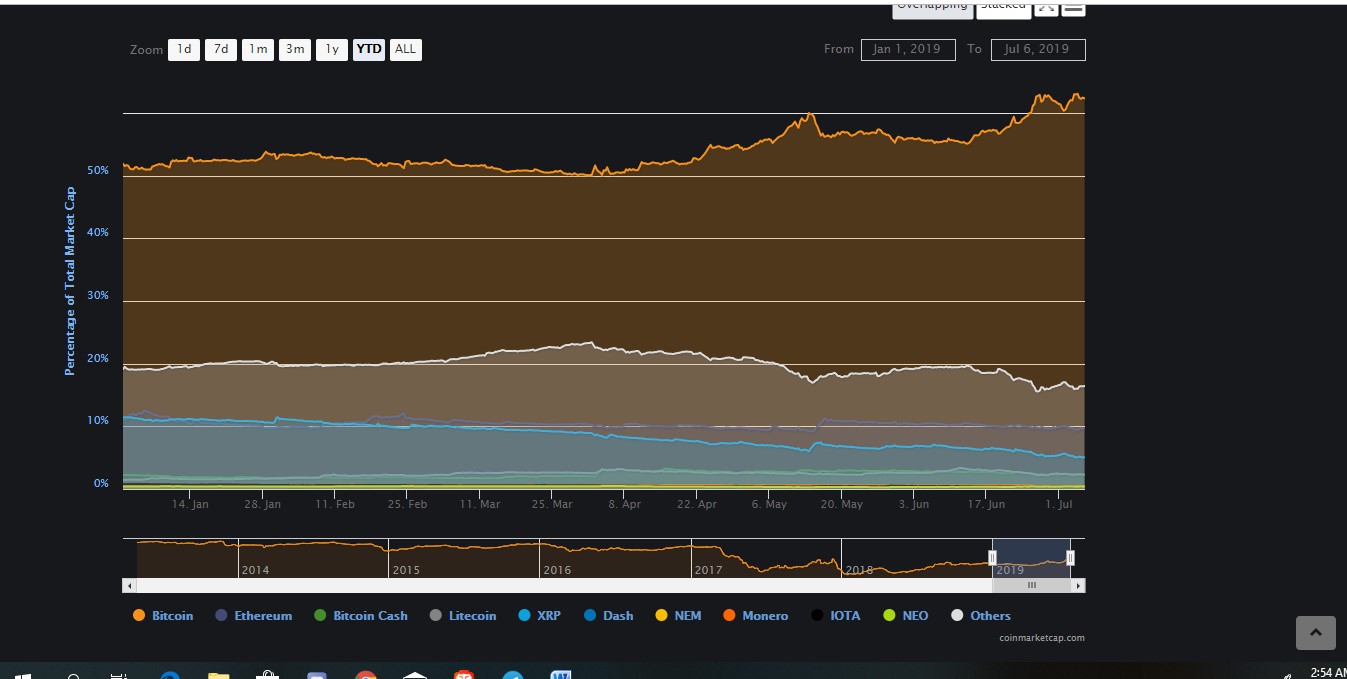 One interesting thing about Bitcoin is that it is always on top of the game. Taking its market capitalization, for instance, and comparing it to the other class of cryptocurrency, you realize it is the mother of all cryptocurrencies. As you can see, Bitcoin is not the fasters in transactions as compared to other cryptocurrencies, but you know it still thrives to be on top of the game, and institutions choose it over any other cryptocurrency. Smart investors and institutions always look for more liquidity in any asset class before investing as I said, some kind of asset class with an intrinsic value for that matter, liquidity as well. In the case of institutions the fact that it is a modern type of asset class, limited in quantity, liquid than other cryptocurrencies, and has been there for more than a decade now, they always choose it over altcoins. Institutional investors invest huge capitals in the market and for the purpose of which Bitcoin was created, they always see the need to choose Bitcoin over any other Asset class in the cryptocurrency space. This makes Bitcoin stands tall.